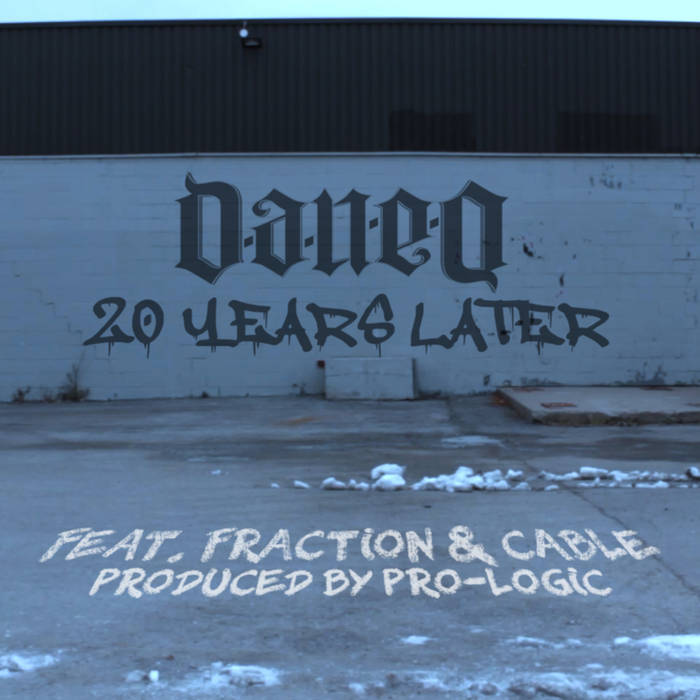 The fourth official single from Dan-e-o's milestone-celebrating album, "Dear Hip Hop: 20 Years Later", "20 Years Later" revisits his 1996 debut single "Dear Hip Hop" with a two-decade-later take on the artform's current state. Expected to be the final sequel to the classic cut, "20 Years Later" features Fraction and Cable on the mic and production from Pro-Logic - all repping Kitchener, Ontario.

INTRO (DAN-E-O - sample):
Dear Hip Hop, I’ll love you ‘til I die
My mission is to utilize my skills on the mic

DAN-E-O:
Dear Hip Hop, what is your status? I pray that you stop
Your latest outrageous attempts at fakeness,
don’t play that you’re pop
Decades have raced since I dropped an ode to you that sold a few
Truth be told the boldness of my devotion’s the golden rule
The dopest dude to never make your acquaintance
On the highest stages while you lost your realness,
I lost my patience
Man, I don’t rock for chump change, I change chumps
Take your Xbox to the rooftop and get your game up!
Nigga get your frame buffed, start working out
What’s that twerkin’ bout?
You’ve really earned some doubt since you curved your route
I got this 20 year scar, bro
And I don’t know who the fuck you really are anymo’!
Do I abandon you or resurrect you?
Reprimand you or give respect due
To the new advancements you’ve leapt to?
Yes dude, I’m still one of your die hard fighters
I’m righteous, harder on these joints than arthritis!

CHORUS (FRACTION – cuts) (x2):
Dear Hip Hop, I’ll love you ‘til I die
To taste the grace of your embrace I will try
100 percent hip-hop
20 years later

FRACTION:
You was my first one, gave birth to my first son
Shining light through you, early lessons I learned some
A lover, a teacher, a brother, a leader
Therefore for my vehicle of inspiration, ducking from creatures
Was in my basement developing skills, she's what I built
The way I feel about you is kinda complex still
Was my soundtrack to life, my theme for daily operation
Though we might float away from each other when you intoxicated
I can't stop loving you, though dark skies summon you
Some ask why I'm up with you, ain't no substitute
Skills in descent, stay up late and walk with the pen
I'm saying, it’s hard to put in sixteen bars
The way I feel about you, the tide arose to trigger these thoughts
I hold, just know that I'm a never let you go
We can still rendezvous on the low, I'm saying

CABLE:
Dear Hip Hop, it's been decades and you still struggling
Headaches from how you buggin’, the hatred conflicts with love it's
A complicated emotional roller coaster, goes up and ‘round
Disappointed you took this era and dumbed it down
Your real fans’ feelings are mixed, love with heavy tears
And try to win the mission that Dan's been talking for twenty years
Utilize my skills, but they compromise your position
Pay homage to your vision, and rock it for those who listen
Pockets got something missing, still lackin’ a pot to piss in
But dollars don't keep me rappin’, it's passion for how you livin’
Status don't make a difference, but yours, let's be realistic
Been touchin’ millions of lives since inception of your existence
Love you ‘til I die, can't fake it or even lie
Regardless of how I age, there's a part of you that's inside
And I swear to keep you alive, truth in every bar that I jot
In every line that I drop, proof your influence can't be stopped
Hip-hop.....