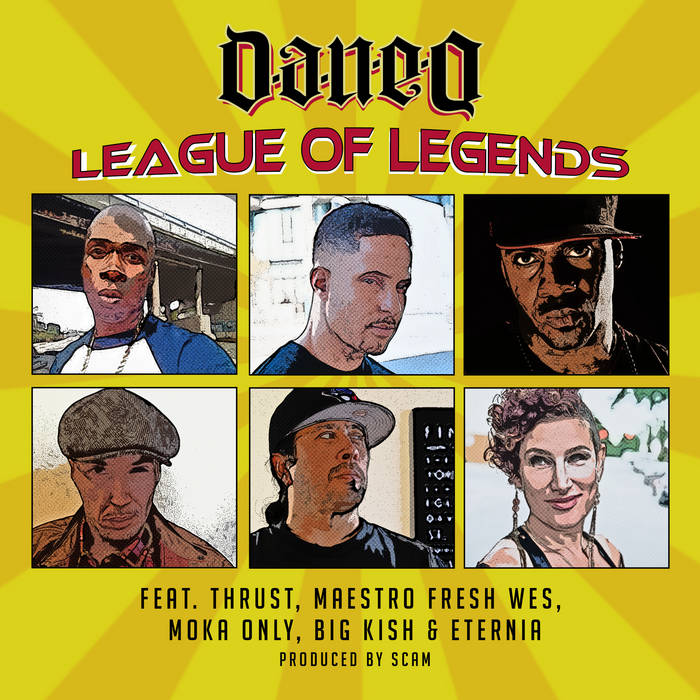 THRUST:
Yeah, T to the D!
Yeah, League Of Legends
Combating all these villains ‘cause they living outta sight
Damn, too many brothers, they be falling to the plight
Yes, the Dark Knight coming to your rescue
Full body armour, nobody gotta guess who
Did it in a minute ‘cause there was no competition
Crack ‘em in the jaw, now they stop, look, listen
You really need that point? Beam me to the sky
Have no superpowers but they swear I’m ‘bout to fly

MAESTRO FRESH WES:
I got the King Reign battery pack and as a matter of fact
I’m pleading guilty for attacking the track
Got a fury and a grudge for the jury and the judge
A killer when the prosecutors wanna budge
I love diggin’ in the crates, feelin’ Brand Nubian
Barricade blowin’ bulldozin’ when I’m bruisin’ ‘em
Fans love it, they hopin’ for the crew to win
Hip-hop forever any era that we’re movin’ in

MOKA ONLY:
Uh, Kareem Serene, indeed Moka O
The superpowers bestowed on me, y’all know
Since the beginning a super output of the flow
From a hundred albums ago, how good is he though?
My own heroes discuss me when the subject of dope gets passed around
Most prolific and I kept the jazz in the sound
And still independent, wow!
If you dependent on some inspiration come and get it now
Beats and rhymes and even the singin' style
The jack of all trades, no new jack, my file
Is packed with stats that’s been stacked up in the media
You don’t believe me? Go and check my Wikipedia

DAN-E-O:
You see me, I’m a killer with words, syllables, verbs
And vitriol slurs that grill and disturb you pitiful nerds
Who’s feeling the surge of my tongue’s mystique
Lawless when I come to spit, I need a gun permit just to speak
Shooting you clowns over beautiful sounds
I’m brutal with nouns, astute and profound, sending crews to the clouds
Dutifully bound to revive the 90’s again
Reside in the lion’s den and I survive ‘cause I’m live with a pen!

BIG KISH:
Looking back at the path and pathological
Special Ed, you burn me? My God…comical
Maxell trash rappers, Soundcloud dummies
How you CEO pretenders be begging for rent money?
Listen: best days still ways to come
Only bitterness shit on another living in the sun
Rock wit’ it, been there, done did it
Lived it and loved the wickedest thickness, lyrics? Come get it

ETERNIA:
I'm in it to win it or maybe coast
Focus for a decade or two and then I ghost
Call me on the bat line, first sign I go
Suited up with words that are wisdom to many folks
I invoke a spirit of old
Learning to walk without a spot of ego, my leader is simply hope
The assurance of things? I don't know
Just believe that my writing and reciting what's cultivating my soul
That's my goal, all of y'all other folks can boast
I’m over here, posted up, focused on how to grow
I'm over here, smiling, providing and take it slow
Right now ya see me, next time ya...won't